My Dog Stomach Gurgling & Rumbling and Not Eating

As an owner of a pet, it is disturbing when their dog stops eating.  Sometimes it eats less or does not eat all day and night. This is a symptom stating that the dog is having issues with digestive issues. If you think that your dog has lost its appetite and you hear loud gurgling noises from its stomach, it is something you need to be concerned about. This is when you need to know what to do in these situations.

Quiet Gurgling Sound from the Stomach Is Normal

If the dog’s stomach is gurgling which is also known as borborygmus or borborygmi by the veterinarian. Thus, is considered to be natural in dogs. It’s the sound of the gas or fluid which is moving up and down in the dog’s stomach making noises. It suggests that the food has been broken down by the digestive organs inside the stomach of the dog.

If the gurgling sound is quiet or is in a moderation then it can be considered normal. However, if the noises are audible then it can be that the dog is facing certain issues such as too much of a gas problem in the digestive system of the dog. It may even be that the stomach is empty and thus you need to feed your dog. Even the human stomach makes gurgling sounds when they are hungry. Your dog may be in the same state.

Some dogs can have episodes of loud intestinal gurgling. When this happens, you may hear borborygmi can be heard all across the room in which the dog is sitting. It is not a crisis but it surely indicates that there is something wrong with the intestinal tract of the dog. However, in most cases this happens when your dog is hungry.

But Is Your Dog’s Stomach Making Noises That Are Loud?

The borborygmi which are normal are very quiet, you would not hear them. However, loud noises which are occurring in the intestines make a loud noise due to accumulation of the gas or when there is excessive activity in the intestine of the dog. Both of these situations occur simultaneously.

Your dog might be hungry or thirsty and the solution to it is food or water. In these situations you should never give too much food to your dog. Moderation of both foods is necessary. Small portions of meals will not upset the stomach any further. Try introducing your dog to a food which is a bit bland than usual. When the dog has a stomach problem, they won’t eat. So, it is best that you give them boiled chicken stew or fish with rice so that the digestive organ has to function less and they can relax.

When Tummy Gurgling Can Be a Sign of Danger

If you have tried giving bland food to your dog but still it does not help your dog and they still suffer from the stomach noises and won’t eat. Then it is something which needs to be checked immediately. It may be that the stomach noises are accompanied with vomiting, weakness, diarrhea, then it cannot be considered as a normal stomach problem. This is a dangerous situation. However, you can simply massage the stomach of the dog if it is a normal situation. Make sure that you are constantly observing your pet’s symptoms for loud noises from the stomach or if they stop eating.

The gurgling can be because of parasites in the intestine which are blocking the digestion and eating things which they should not have eaten. This may lead to serious diseases such as inflammatory bowel disease, glandular disorder and hemorrhagic gastroenteritis sometimes even cancer in the intestines. Be it anything you should immediately consult a veterinarian.

Is My Pet in Pain?

When your dog is suffering from a disease of the stomach it is obviously experiencing pain. You might want to give him a pain killer but this is not a good thing to do unless you have been advised by the veterinarian.

Remember to Help Out Your Vet

If you see that your dog’s stool is watery and it has been vomiting. Make sure to take a sample of both to the veterinarian. Put the sample in a container which is clean. Both samples should be in separate containers. The samples will help your vet to understand the disease your dog has been suffering from and also come to a conclusion as to why the dog is unable to eat. 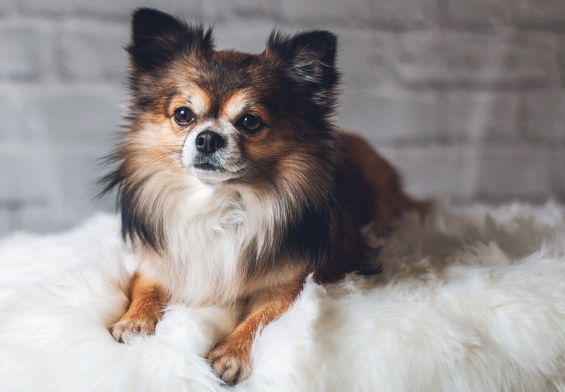 Why Do Chihuahuas Sleep So Much