Many dog lovers around the world prefer the German Shepherd species over any other breed. German Shepherds make the best family pets because of their affection for people.

Besides, Shepherds can protect and defend their kin, obey the commands of the master in utter loyalty, and work hard beyond their expected limits.

Aside from their good character traits, dog lovers keep German Shepherds because of their unique coat colors.

Anyone can identify the tan and black German Shepherd coats because of their popularity. Nonetheless, most people don’t know about the eleven other Shepherd coat colors that bring the total coat colorations to thirteen.

Some Shepherds are covered in white fur, others red, and several others blue. The colors vary depending on the parent’s genetics and the most predominantly inherited specifications from the Shepherd parents.

Coat colors, however, provide useful information about the breed’s history. We conducted some research on the thirteen coat colors and will discuss them in detail and their historical background.

Black colorations appear on the Tan and Black Shepherd back – saddle-like in appearance – and another black print runs over their faces, like masks. Tan colors tend to appear on German Shepherds’ chests, underbellies, and napes.

Tan colorations vary in German Shepherd pups – they come in dark or light shades – depending on the parents’ coat colors and the most dominantly acquired genes from both progenitors.

At a young age, puppies’ coats appear black. However, tan colors begin to show more as they grow out of their fluffy furs. A tan and black German Shepherd will most likely emerge victorious in a show tournament due to their striking and perfectly blended complexions.

Cream and Black coats carry a lighter shade of the tan and black colorations. Saddleback-like patterns cover this Shepherd’s top back, and a mask of dark fur covers their faces.

In contrast to the tan and black coats, cream and black furs feature lighter shades – more like the color that results when diluting milk in cappuccino – unlike the rich and deep brown of tan.

When ranking Cream and Black Shepherds in terms of beauty, their cream shades tend to draw attention to their striking black marks to produce an overall beautiful Shepherd.

The AKC recognizes Red and Black Shepherds as another official color of the species. The artistic variations of the colors give the Shepherds a unique general outlook.

Aside from their significant coloration difference, the Red and Black Shepherd coat patterns look similar to their Tan and Black counterparts.

Reddish patches replace the tan colors of Tan and Black Shepherds. Red colors come out more strongly than any other coat colors, to overshadow even the black shade.

Red and Black colors indicate the parentage or ancestry of a specific GSD more perfectly than any other genealogic determinant, such as their working history.

Blackly covered body parts of Silver German Shepherds include the saddleback appearance on their backs and a fair share of black masking their entire visages. The unique silvery feel on their coats makes Silver Shepherd coat colors look stunning.

Silver GSDs originate from a working German Shepherd lineage. When it comes to exhibitions and contests, organizers and participants prefer the Silver breeds with intense and dark complexions than those with lighter fur shades.

Scientists still can’t clearly explain the silvery complexion. However, the rare Silver Shepherds owners and breeders generally assume their coloration comes from the regressive trait reserved in both parents.

Almost every coat color pattern follows the design exhibited by Tan and Black Shepherds. The same variation occurs in Silver Shepherds, with the silvery fur replacing the tan shades.

Both puppy’s parents should carry the regressive traits (the liver color) for the coloration to manifest in the offspring. Unlike other consistent patterns, a Liver German Shepherd does not resemble the dark saddle-like and black masked-face Tan and Black Shepherd’s variations.

Liver Shepherds replace the black back and face patches common in tan and black Shepherds with deep brown or dark colorings.

Most competition organizers consider the liver coatings as serious color flaws in normal GSD coloration; for this reason, they quickly get left out or end up unpopular when included in major dog competitions.

Nonetheless, organizers regard the distinctive color as a critical fault amongst the GSD breed and thus can’t allow the Shepherds to participate in shows or dog tournaments.

While promoters consider the color a flaw, the AKC approves the coloration and recognizes Steel Blue Shepherds as normal GSDs and without any biases.

Bluecoat colors occur due to the regressive blue chromosomes carried by each of the puppy’s parents. In the present-day modern world, dog lovers can hardly find Steel Blue Shepherds because breeders nurture the pups for fashion and aesthetics rather than working or exhibition.

A greyish nose – a significant semblance difference – instead of the common black one rests on a Steel Blue Shepherd’s muzzle.

Horand, the first Shepherd with sable fur, lived in Europe in the late 19th Century. Notwithstanding, Sable Shepherds hardly dominate the dog world despite their original genetic ancestry. The Tan and Black Shepherds take all the credit and fame.

However, the superabundant popularity and breeding of Tan and Black Shepherds discourages many dog keepers from keeping the colors; hence they opt for the less common Sable German Shepherd.

Solid sable colors do not cover the entire Shepherd’s body. One strand of fur can contain a blend ranging from dark to light pigmentation, thus creating a hombre effect. Towards their tips, Sable Shepherd furs sometimes turn entirely black.

Predominant genes will influence the occurrence of a Gray Shepherd, just like with Sable Shepherds. Grey-colored Shepherds occur when the dark pigment chromosomes dilute each other – for this reason, the Gray Shepherd will resemble their wolf antecedents.

Finding a Red Sable puppy won’t come as a challenging task for dog lovers because of the coloration’s popularity. Many puppies worldwide bear the Red Sable pigmentation, so finding the coloration variation from the breeder of your choice won’t take you long.

Unlike in Gray Shepherds, the prevailing chromosomes in Red Sable Shepherds do not mix and dilute each other to form a lighter shade of dark colors. A new deep-red brown pigmentation stands in place of the usual tan you would observe in the Sable Shepherd color variation.

In a nutshell, a Red Sable Shepherd’s fur comprises a consistent mixture of black and red all over significant parts of their bodies.

Bi-color Shepherds possess the usual tan and black colorations. However, their general appearance portrays a colored Shepherd with more dark than brown colors – the tan to black ratio can vary but will often stand in the ratio 1:9.

If you nurture a ‘black’ GSD and one day notice even the slightest strand of blue, white, or any other color for that matter, you ought to reconsider the breed’s classification and reclassify the Shepherd as Bi-colored and not a pure breed.

We categorize a Panda German Shepherd amongst the rarest GSD coat colorations. Panda Shepherds get their name from their coat colors, which nearly resemble a Panda’s coat.

Most dog keepers believe that Panda Shepherds originate from mixed GSD species. However, breeders do not crossbreed different species. Instead, they breed purebreds to reproduce the Panda German Shepherd, another purebred GSD.

Despite them possessing the typical tan and black colors, Panda Shepherds get their extra uncommon white spots from their chromosomal mutation.

Probably one of the rarest GSD colors, a White German Shepherd exhibits quite a spotless layer of fur, one that often gets mistaken for albinism. Many critics believe the coating variation occurs due to the albinism trait, a myth that people confuse with the species’ melanin levels.

The white fur in White GSDs occurs due to the low levels of melanin formation hence their pallid complexions. We can attribute the white coloration to genetic differences.

If you wish to nurture spotless or white puppies, we would advise you to copulate a white male and a white female. Both parents should carry the regressive white genes so that it effectively gets inherited by the puppy.

We believe White Shepherds descend from a working GSD ancestry. However, breeders quickly judged the breed’s color as too weak a trait to match a hardworking and robust dog’s striking stance – they even sought to eradicate the species from GSD classification.

Besides, most organizations and institutions, including the AKC, disregard the breed’s white trait and bar the breed from participating in any dog competitions.

Shepherds with one or two other color patches of black don’t fall under the Black German Shepherd classification. Black GSD enthusiasts believe the breed possesses a more rectilinear back compared to other GSDs despite the lack of scientific proof to date.

Black pigments occur as regressive traits and not predominant genes. For you to get a black pup, you need to mate two black progenitors or a tan and black parent to favor the entire inheritance of the recessive chromosome.

A black puppy only requires both parents to carry the black, regressive genes.

A German Shepherd’s color reveals way more about the species than meets the eye. Different colors present various historical backgrounds about the breeds – their working descent, recognition, and performance levels in shows and tournaments.

All the beautiful thirteen GSD colors only add to their beauty. Notably, each color’s rarity affects the pup’s selling price amongst breeders – a Steel Blue Shepherd costs more than a Tan and Black puppy.

Also, fur colors don’t affect a German Shepherd’s behavior, health status, or behavior; so, ensure that you pick your favorite color and nurture the newly acquired pup into a unique and beautiful companion. 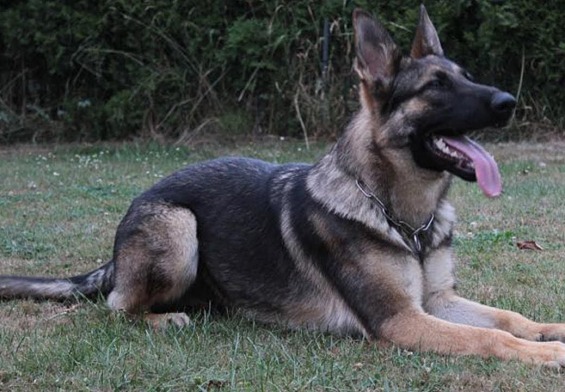 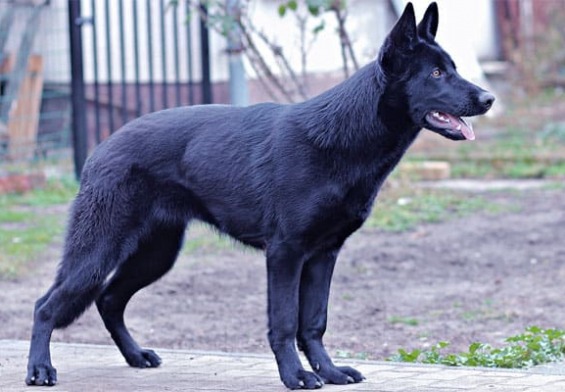