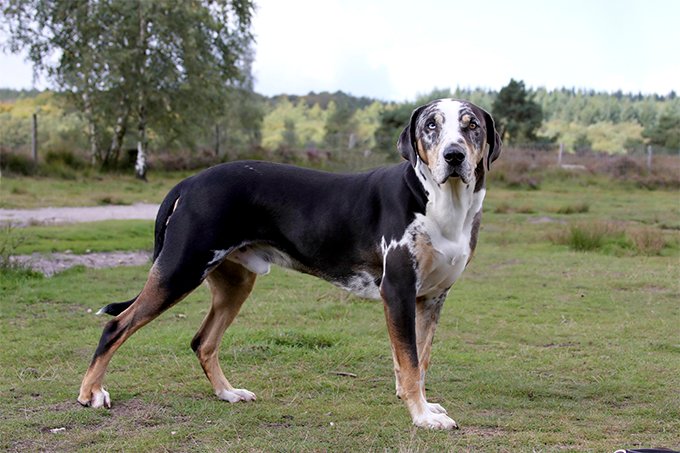 Are you a dog lover and are looking to get a dog without an impressive level of focus and, at the same time, a great companion? If yes, the Catahoula-German Shepherd mix is a breed you should look out for. When you look at this dog from afar, it could seem aloof. This, however, is okay as it is all about work.

The German Shepherd Catahoula mix is very territorial and might not be very friendly with strangers. When around its handlers, this dog breed shows guarding signs.

This designer dog is not one that can be handled efficiently by novice owners. To get the best out of this dog, you will need to be an experienced dog owner.

About the Catahoula Breed

AKC has made it known that the Catahoula Cur, also called the Louisiana Catahoula Leopard, is a mixture of several dog breeds. There is a considerable likelihood that the Catahoula is from a blend of Mastiffs, Bloodhounds, Greyhounds, and maybe wolves.

The Catahoula can be recognized by its mottled coat, which might be yellow, red, tan, chocolate, brindle, blue, or black. It also has splashes of white.

Its coat is coarse and short. Also, it has a gait that is similar to that of a horse. That’s not all. It is associated with pale blue eyes, which is also known as “glass” eyes.

While lots of Catahoula dogs have pale blue eyes, not all of them do. Some others have an eye coloring that is referred to as cracked. This implies that the two eyes have different colors. One eye might be green in color, while the other is brown.

Catahoula is quite big and has webbed feet. Usually, it has a weight that ranges from fifty to ninety pounds. Also, they are tenacious and muscular. This makes it ideal for herding and hunting.

This dog comes in handy when hunters want to get out feral hogs, which are found in southern United States. Catahoula dogs are fearless. Therefore, they are ideal for dealing with feral hogs.

The Catahoula was not bred to spend so much time in one part of the compound or in a kernel. Therefore, as a dog owner, you should not leave them in their kennel as they will be depressed. When left alone in your home, Catahoula dogs can be destructive. They could chew on items around them, damage your properties, or dig holes in your compound.

This might seem like a real challenge. It, however, can be solved quickly. All you need to do is ensure your Catahoula is busy, and the issues of it destroying things around will be solved permanently. If you own this dog, you must realize that it was designed to work. It enjoys guarding and herding. Therefore, it might not be happy until it has spent so much time working and is tired.

Catahoula dogs have guarding instincts. Due to this, they are generally reserved when they are around people they are not very familiar with. If you own a Catahoula, you must note that this dog breed gets mentally and physically mature later than some other famous dog breeds.

This dog breed might not become entirely physically mature until it is two years old. That’s not all. After being grown, it might act like a puppy for about a year.

Catahoula can get bored very quickly. When it gets bored, it’s usually mischievous. So, to prevent this dog breed from getting bored, ensure it takes part in a lot of exercises.

The Catahoula can be mixed with a couple of other dog breeds. Popular among these breeds is the German Shepherd.

About the German Shepherd

Although generally linked to wolves, you can’t tell what breeds got mixed to create the German Shepherd. While people are not usually aware of what dog breeds were mixed to develop the German Shepherd, the modern German Shepherd as we know it today was created in 1899. Captain Max Von Stephanitz, a retired military officer, was responsible for its creation.

Lots of dogs were used by shepherds when herding their sheep in different countrysides in Germany. Von Stephanitz was a great admirer of these other dogs. While he considered these dogs significant, he was interested in getting these breeds mixed into one healthy breed.

To develop one dog from the many available shepherding dogs, Von Stephanitz went to Great Britain to study dog breeding. He borrowed many techniques used in breeding dogs in Great Britain and applied these techniques in developing the German Shepherd.

He also noticed some dog breeds that had similarities to the dogs used in many German shepherding communities. Von bought a dog called Hektor Linksrhen in 1899. This dog was a show dog. Also, it was intelligent, strong, and well-bred.

The captain went on to develop the Verein fur Deutsche. He did this with declare Hektor, also known as Horand von Grafrath.

He did not stop at this. Horand got paired with other dogs of similar quality, as well as a pup known as Hektor von Schwaben.

As the program went on, the dogs involved in this breeding program were bred back to different Horand offspring. According to genetic records, not less than four wolf-crosses were a part of Von Stephanitz’s breeding plan.

The German Shepherd dog became a lot popular between 1899 and the time the first world war started. Although it was bred for herders, there was a change in the purpose it was developed.

As life went in, industrialization became a part of European life. Framers soon stopped working on the farm and began working in factories.

While this was not good for Von Stephanitz, he was not discouraged. The military required dogs, and he knew this fact. Beyond just needing dogs, the military needs intelligent, very trainable, and courageous dogs.

The German Shepherd was perfectly suitable for what the military would look out for in a dog. With this in mind, the captain started training his dogs. He prepared them to work with the military and sell them off to the police and the army.

While the First World War was on, the Red Cross used the German Shepherd dog as a medical and rescue dog. Additionally, the German Army used it as a rescue dog, supply carrier, and messenger.

That’s not all. The German Shepherd was also used as a guard dog and has been a guard dog ever since.

Although Europeans majorly used the German Shepherd, other armies soon discovered its bravery and intelligence. Not so long after, it was introduced into the United States.

Although this pup, which was named Rin Tin Tin, did not delightfully start life, it became the face of German Shepherd dogs in the United States.

Even though it is generally a fantastic dog, the German Sherpherd dog did not get a positive reputation in the United States because it can be easily traced to Germany. The American Army battled the Germans in World War I. Furthermore, Hitler that most Americans hated, had a German Shepherd.

Hitler called his German Shepherd Prinz. It was rehomed when destitute. It, however, got away from its new home and found its way to its owner.

Because of this dog’s German roots, the American Kennel Club called in ‘The Shepherd Dog.’ Also, in the UK, it was called the Alsatian Wolf Dog for many years. This was done to make people accept it more and get comfortable with it.

The Mix between the German Shepherd and Catahoula

Although not any people know this, the German Shepherd and the Catahoula breed very well. These dog breeds, although very different, have similar temperaments. They both enjoy working and seem very comfortable with the same tasks.

These two dog breeds are not very comfortable with strangers. This is because they are interested in guarding their territory and their family. Nonetheless, when they get used to non-family members who frequently visit the house, they will become protective of such strangers.

So, if you need a dog for hunting or securing your home, the German Shepherd Catahoula mix should be considered.

Why Do Police Use German Shepherds As Police Dogs