What Other Dogs Do Pitbulls Get Along With?

Pitbull compatible dog breeds: which dogs do they get along best with? Let’s see what these breeds and their main characteristics.

Quite often, the mistake is made of associating this dog breed with aggression, biting, and fighting. Even in the USA, Pitbulls were included in the list of dangerous breeds for humans for a certain period.

The responsibility for all this, however, is the only man, as this dog is not aggressive at all and raised in emotionally stable and affectionate environments has the possibility of developing a charming and loving character, just like that of other dogs with whom he is also very peaceful and friendly.

But what particular dog breeds are compatible with the Pitbull? In the next paragraphs, we will see specifically with which dogs our four-legged friend prefers to spend his time.

Here are the Dog Breeds That Get Along with Pit Bulls

The Pitbull is a brave, healthy, intelligent, sweet, and affectionate dog but also a bit stubborn, loyal to the owner if well behaved from a puppy. It is a dog that, if grown in a healthy environment following its needs, also lends itself to being a family dog, perfect for children, even someone uses it for pet therapy (to help people with autism).

The potential aggressiveness of this dog is often encouraged by the owner himself, who, wanting to use this animal’s physical prowess, is very often trained for defense but in an unhealthy and balanced way.

As we previously mentioned, the Pitbull is a dog like all the others. Perhaps its appearance certainly deceives, but it is docile and calm both with humans and with other dogs, with whom it loves to share everyday life and spaces, especially with some breeds in specifics. So, if we were to get a four-legged friend to give Fido Company, what is Dog Breeds That Get Along with Pit Bulls?

The Labrador is a breed that generally gets along well with everyone, and by all, we mean humans and other animals. The nature of this dog is to run towards other animals to approach with a curious way and in its way to invite them to interact and play. It is a companion dog for the whole family, including animals without exception, which is why it is one of the dog breeds compatible with the Pitbull.

The Labrador loves being with the family and has a great need to socialize. He is not aggressive, obedient, and tireless, and very easy to train. He is sweet and intelligent, elegant, and courageous. It is a dog that does not like a sedentary life, being very lively but is also very friendly and easygoing with other dogs.

The Labrador is a dog with a sturdy build with a broad head, bulky ribcage, and strong limbs. It has a height at the withers for males, 56-57 cm, for about 35kg. The colors of the coat can be white, cream, and chocolate. The eyes are hazel or brown with a lively and intelligent expression.

The Australian Shepherd is a dog that needs to socialize with other dogs and other animals from the first months of life. Established this can manage social relations well with other dogs, particularly with individuals of the opposite sex. However, it also rides well with the same sex and dogs of different breeds, including Pitbulls.

The Australian Shepherd is a very empathetic dog endowed with a lively intelligence, ideal for the children of whom he takes great care, he is loyal to his masters to whom he shows his affection. Rarely quarrelsome with other dogs, it is often used for flock control, rescue at sea and on land, anti-drug, guide dog for the blind, and suitable for various sports activities such as classic obedience rally obedience, but excellent in agility.

The Siberian husky is the breed that has always been identified for towing jobs, such as sled towing, which means that this animal has always shared space and time with other dogs. It is inclined to cooperate with dogs that perform the same task, but it arises with the same spirit even if of a different breed.

He is a gentle, outgoing, cheerful, and friendly animal, he is not aggressive towards other dogs, and there is no problem growing him with other breed dogs even if he is a Pitbull. The Siberian Husky also behaves very well with children and a good companion dog. He manages to live quite well in an apartment but prefers outdoor spaces.

Boston is a dog that loves to play with other dogs and is friendly to people too. It has an excellent character, which makes it the ideal companion of any animal. It is a very balanced dog, brilliant, and always controlled during the game, never exceeding hyperactivity.

It loves being with its owner and children and tolerates other dogs’ presence very well it is among the dog breeds compatible with the Pitbull. Despite its past when the goal was to create fighting dogs, for this reason, the Bulldog and small terrier dogs were crossed, and despite its appearance, today breeders over the years have managed to re-educate the breed, making it a good companion dog, ideal for families.

It is a small companion dog, with a height ranging from 38 to 43 cm and a weight that can reach around 9 kg. He has a muscular physique and a so-called square appearance that is squatly highlighted by the characteristic jaw. The coat is short, smooth, and shiny, with a streaked, black, seal color with white markings. The eyes are largely black and wide apart.

The Golden loves to play and does so with tremendous enthusiasm if he has another dog to play with. He has excellent social relations with other dogs, mainly if he has been used to it since he was a puppy. It is a dog with a very playful and lively nature. It takes very little to make it happy, but what fills it with joy is having a company that is always ready to play.

Therefore we can safely say that it falls within the dog breeds compatible with the Pitbull. The Golden Retriever is an adorable, loyal, and extremely intelligent dog, with a good-natured and affectionate, sensitive, and even empathetic nature. He is a dog who manages to be very patient with children and his animal friends.

It is often used in agility, but also as a rescue dog. The Golden is a medium to a large-sized dog with a height ranging between 56 and 61cm and weight that ranges between 25 to 32kg. It has a wavy or smooth coat and in various shades from gold to cream, with the peculiarity of being water repellent. The eyes are dark brown and with a deep and intelligent expression. 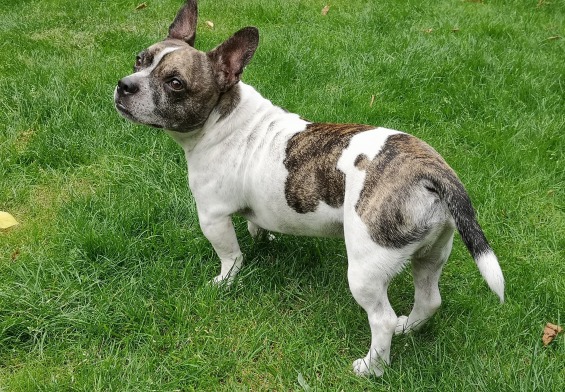