Are Twizzlers Bad for Dogs & Puppies to Have?

Humans, especially children, love to lick candies and sweets. Even adults may occasionally go against the counsel of our dieticians to have some, and Twizzlers are a popular choice. If you have a pet dog that is very dear to you, you might have even shared your favorite Twizzlers with it. In this article, you’d find out if Twizzlers are safe for consumption by dogs.

Before we go further, I’ll just tell you that Twizzlers are not good for dogs. In fact, they could even be lethal as the high amount of sugar in them may end up causing serious health challenges.

Firstly, sugars are not even a natural constituent of the dog diet. Dogs started eating sugar when humans started domesticating them, but in the wild, dogs do not eat sugar. Therefore, even if your dog loves sweets, note that they are not one of its natural food and can cause serious harm.

Twizzlers: What are they?

Twizzlers are candies made mainly for children but also enjoyed by adults. Given below are the ingredients that are joined together to make Twizzlers.

This plays an important role in the making of Twizzlers as it serves as binding agent. Although dog owners believe that wheat is good for their pet and used for making their meals, it is not entirely true. Wheat flour contains glutens, which is a form of protein that triggers allergies in some dogs.

This is a major ingredient in the preparation of candies, and as I stated earlier, sugar is not a natural part of dog meals and not healthy for them.

This also acts as a sweetening agent, just like sugar and brings in moisture and enhances the texture of the candies.

This is also another important ingredient in making Twizzlers, and a lot of dogs are allergic to it. Common allergies include itching and diarrhea.

This is used to help the Twizzler maintain its water content.

The danger of Twizzlers to Dogs

First, before we even discuss the danger, we should talk about the benefit. Well, there is not a single ingredient in twizzler that contributes to the health of your dog. Don’t you think that it is a bad idea to give something that adds no value to your dog’s well-being it?

Now for the danger, the major risk that your dog is exposed to when it consumes Twizzlers is that it becomes exposed to the risk of diabetes and the myriads of another sickness that follows, including:

Dogs that consume sugar are exposed to diabetic cataracts as they age, just like humans. When a dog suffers from this, it could result in blindness, except surgery is performed to remove the cataract from the eyes.

Sugar contains many calories; therefore, Twizzlers can make your dog obese. In short, sugars are noted to reduce dogs’ lifespan. Dogs like Samoyed, Labrador, and German Shepherd are mostly at risk of becoming obese.

It is no news that sugar affects the dental health of humans, resulting in bad breath and an increase in bacteria. The same holds true for dogs.

Xylitol is found in corn, fruits, lettuce, peaches, and many more.  It is a form of alcohol that occurs naturally in plants and is used in sugar in processed foods like candies, chewing gums, etc. Although it is not harmful to humans, it is toxic to a dog’s health.

Even a small amount of xylitol can cause hypoglycemia in your dogs, resulting in liver failure, seizures, and even death in some cases. Twizzlers, like other candies processed foods, are more likely to replace sugar with xylitol. That is why it is a good idea to check the package for traces of xylitol before bringing them home to your pet.

Are Twizzlers Harmful to Puppies?

Given the health implications of feeding tweezers to a mature dog and the fact that there is not a single health benefit of your dog having them, it is a bad idea to give them to puppies.

This is because the puppies have a weaker body system than an adult dog. From experience, even a small amount of sugar can be catastrophic to the health of a puppy.

Other Foods that are Safe for Humans but Harmful to Dogs

Dogs are wired differently from humans, and so our nutritional needs are also different from theirs. There are several meals on our menu, which are good for us but toxic to dogs. Although there are also some food we can share with them, here is a list of food you should never give your dogs.

Alcohol is safe for humans to consume in small quantities, although they harm the livers and affect the functioning of the brain. Alcohol is very harmful to dogs due to their body size, and even a small amount can result in diarrhea, nausea, and difficulty in breathing.

These are healthy spices in our meal but destroys the red blood cells in your dog. Just a little amount of Garlic powder or onion can cause a huge catastrophe.

The presence of Methylxanthines in Chocolate and Caffeine makes them highly dangerous for your dogs. This can result in seizures, tremors, and other symptoms of hyperactivity. In extreme cases, it can cause death.

These are a common cause of kidney failure and death in dogs.

This is a cause of numerous digestive problems in dogs, resulting in diarrhea, vomiting, etc.

Eggs are good for dogs when cooked, but raw eggs can cause diseases such as Salmonella and E.coli.

All that has been said in this article reiterate the fact that dogs should not be fed with Twizzlers because of the high sugar content in them. 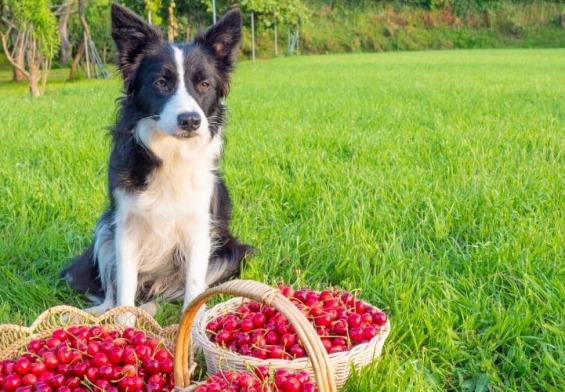